If you missed ISTE this year like I did, then you’re in luck! One of my favorite activities from the Apple Education Pop-Up Classroom was featured on the Apple Teacher Learning Center page! There are step-by-step directions in creating your own pop art masterpiece! I decided to play around further and created a pop art image, video, and gif! All you need to do to take the project a bit further, is change your number of Keynote slides and export as a video or gif.

The Apple Teacher Learning Center has a collection of creative lessons to inspire you to apply creativity in your classroom lessons. Included are lessons on:

Click here to visit the Everyone Can Create lessons and activities shared at ISTE.

Click HERE to learn more about the Everyone Can Create collection of inspiring lessons and activities to infuse creativity into every subject.

This year, I really wanted my SWAT Team students (Students Working to Advance Technology) to help create an event to reach out to other students. We decided on creating a film festival to promote video creation. At first our goals were quite high and I knew that our first year we needed to start small and build on what we learn in year one. So, that’s just what we did. We decided to create a completely online film festival and we opened the application process to students in grades K-5 in our local school district. We marketed our event, gathered sponsors to award the winners with great prizes (a wonderful incentive to get student participation), and we advertised through our school district and various social media outlets. The films were due on March 3. We received 7 submissions and although I was initially disappointed by the lack of participation, I realized that this year was completely focused around the learning process in order to make next year’s event even better. As I look back, I now understand how this event taught my SWAT Team students so much more than I initally thought! They learned how to create and market an event, how to reach out to our school district, how to create a site where students can upload their videos, and how to gain sponsors. Once the submissions came in,  my students learned the true art of critiquing the videos which were submitted. We talked about various film elements to look and listen for as they watched the videos. We had great discussions after we viewed the videos about what was good about each and what could be improved. We talked about using various filming techniques and camera shots. We talked about how using apps such as Puppet Pals and Drawing Pad within iMovie could enhance films that were created using other methods. I was proud at how my students viewed the videos and how mindful they were to celebrate the risk each of these students took to put their work out there for the world to see. We celebrate the creation of each of these films!

Here’s the video we made to promote the film festival:

Here is a video we made to announce the winners of our first film festival:

Here are the top three films:

Here is a list of all of the films!

Thank you to all who participated!! We look forward to next year’s Film Festival! 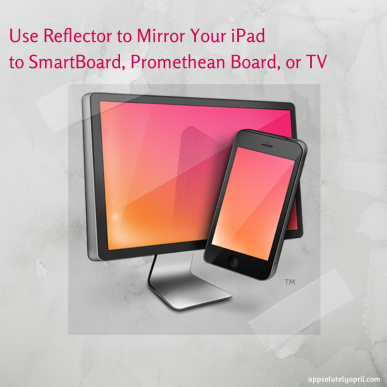 I use my Apple TV in my classroom on a daily basis. I demonstrate on the iPad and my students share their creative work on the iPad to the whole class via Apple TV and our Promethean Board. I do know that some teachers can’t afford to spend the $99 on an Apple TV. Enter a very nice and inexpensive solution: Reflector.  Reflector is an AirPlay receiver that allows you to wirelessly display your iPad or iPhone on your computer. Mirror your device on a big screen without wires or complicated setups. Play games, watch movies, demo apps or present on the big screen from your iPhone or iPad. With Reflector, everything you do on your iPad is wirelessly streamed to your computer, which is connected to your board, in real time! The best part is that it is only $12.99! You can’t beat that and it is a great solution for the teacher who is having a hard time coming up with the $99 for Apple TV. Additionally, all of my screen recordings that I create on the iPad are recorded using Reflector. Students can use Reflector to do their own screen recordings and app tutorials. You can record your screen but also need to use QuickTime to record your audio and can export your movie and edit it in iMovie. So many great possibilities for teaching and learning…time to start exploring!