One of my favorite books is A Bad Case of Stripes by David Shannon. I’ve read it to my classes every year at the beginning of the school year since I began teaching. When the iPad came around, it changed the game as far as what my students were able to do with creative activities that reinforced the book. I am so excited to share this with you and I hope that you and your students enjoy it! These guides are prepared for the K-3 classroom, but you could certainly take these templates and modify them to match literacy objectives for your grade level. The skills in Keynote are truly great for any age group of learners.

I’ve created a literacy-themed Keynote template, which allows students at the beginning of the year to not only read the book as part of an ELA unit, but also dive into how to utilize the creative tools in Keynote. I would do this as a group with my class, giving them time each day to explore a new tool in Keynote. At the end of the unit, students should be able to take their knowledge and build their own templates or guides and be quite comfortable and knowledgable about formatting and options in Keynote.

Teacher Guide: Click HERE to view the presentation. Duplicate it and you will have your own version. The teacher guide has lots of little tips and tricks that you can use as you guide your students through their own version.

Student Template: Click HERE to view the presentation. Duplicate this one and use Apple Classroom to send this file to your students and they will each have their own copy. Don’t have enough iPads for the whole class? This would make a great station in a center.

I sure hope you love these creative activities as much as I have over the years. With new iWork updates, this project constantly changes, which I love! 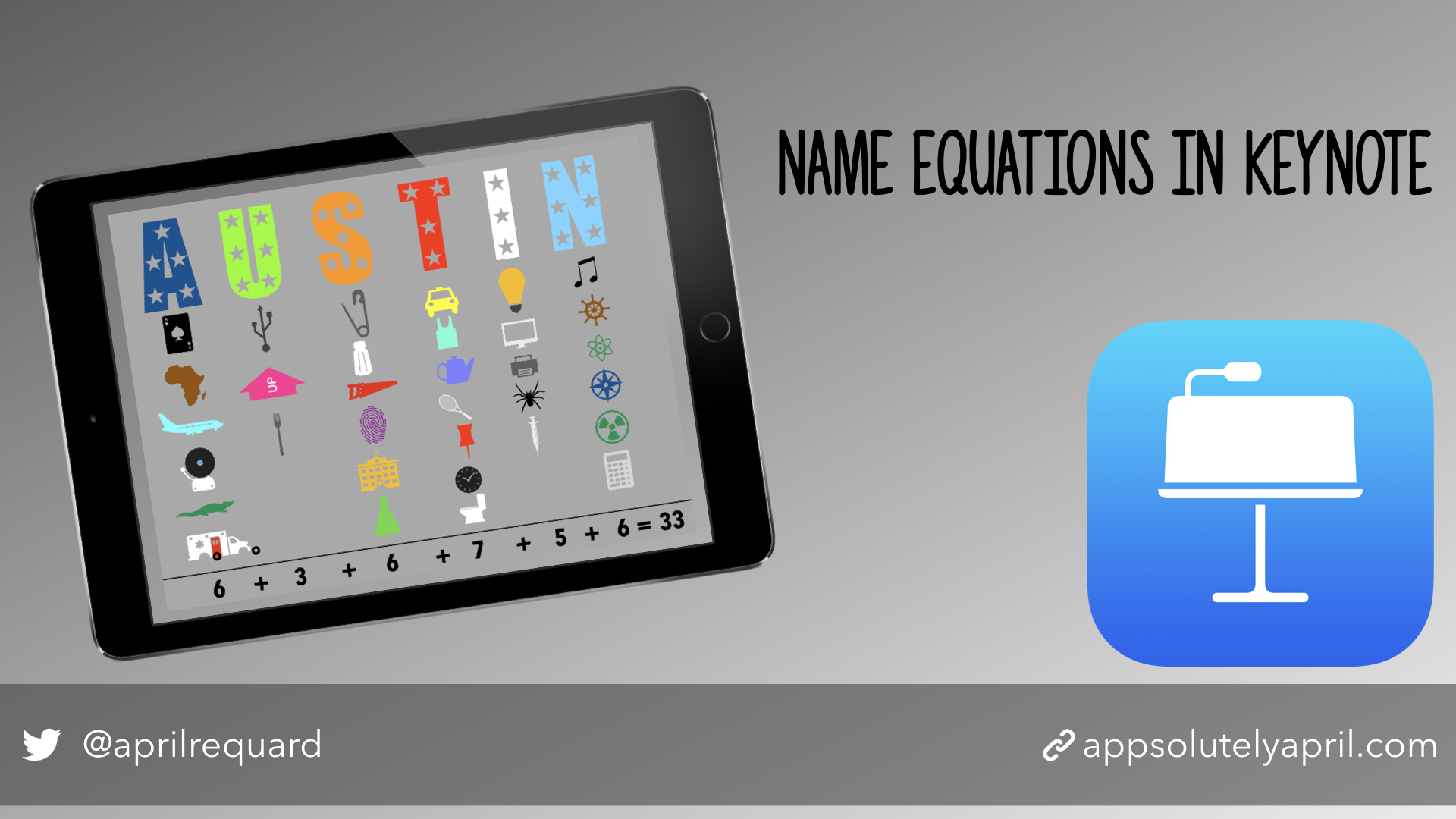 This project collides literacy and math in a way that allows students to express themselves creatively. When you have combinations like that, a lesson is sure to be a success.

This project takes students down a powerful path in understanding a program such as Keynote (traditionally only thought of for presentations). Here are some of the skills they will learn in this fun project:

Each child’s creation will be different and students will interpret the shapes in different ways. It’s important to note that some shapes have multiple meanings and can start with various lettters. For example, in the creative piece below, Austin uses a fork for the word utencil under the letter U. 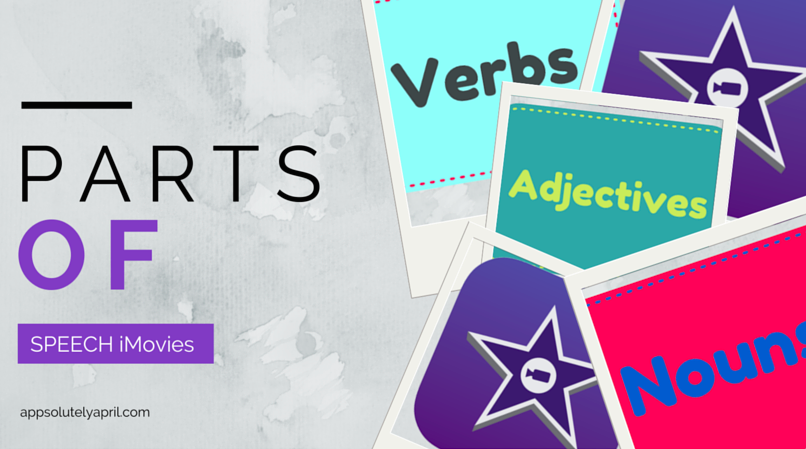 What a better way to demonstrate knowledge of a topic than by creating a video using iMovie! One of the great things about iMovie is the built-in trailers that kids can use to demonstrate or show their learning. I have kids create movie trailers to show their learning in all content areas and the result is always amazing. This time around, I had third graders showcase their knowledge of verbs, nouns, and adjectives. I have included a few of my favorites below. One thing that is very important to note is that I never allow my students to just take off with the iPad and begin taking pictures and videos for their projects. They must always do a rough draft where they complete an outline as well as the built in storyboard in iMovie. Additionally, this is also where they can decide what type of shot (video or still photo) they will add to their movie. A great resource that I love to share with others was created by Tony Vincent. He has created planning PDFs, which include fillable or printable templates for students as they plan their iMovie trailers. I love this resource and I use it all of the time! Once students have planned their trailers, then they get right to work in editing the text and adding photos and videos.

Verbs Can Be Fun! from April Requard on Vimeo.

Verbs are Everywhere from April Requard on Vimeo.

Nouns by Dylan and Landon from April Requard on Vimeo.

Nouns by Ahmed and Shayan from April Requard on Vimeo.

All Sorts of Verbs by Parishi and Asha from April Requard on Vimeo.

Verbs from April Requard on Vimeo.

Adjectives: Reese and Caitlin from April Requard on Vimeo. 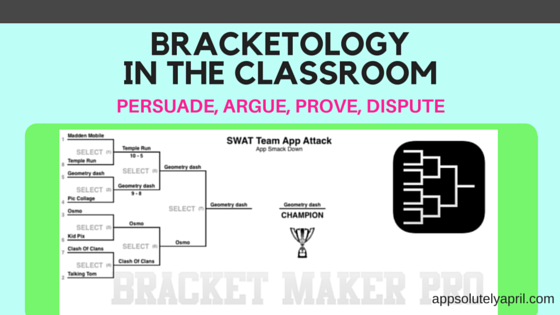 A good friend of mine recently shared this app, Bracket Maker Pro, and we had a really fun time playing with it. I knew I wanted to try it with some of my students. Today, my SWAT Team (Students Working to Advance Technology) met after school and I thought it would be fun for them to have an epic “App Smack Down.” I asked the kids to get in groups of two or three so that we could have 8 teams. Since this was for fun after school, I told them that they could choose any app to showcase and they would have one minute to speak about the possibilities of the application and why we’d select that app over the opposing team’s app. Bracket Maker Pro  (this is an iPhone app, but can be used on iPad as well) makes it very simple. All you do is select the number of teams, select whether it’s single or double elimination, and most importantly shuffle the order, so no app has a higher seeded advantage. Then, the lightning rounds begin and each team has one minute to highlight their app. Once they both present, then the group votes for the team that will advance through the bracket. Since I work with very competitive 4th and 5th graders, I had them vote anonymously. Finally, once the votes are tallied,  a winner advances to the next round. Since we did 8 teams, our bracket was smaller than the Sweet Sixteen, Elite Eight, Final Four, Finals, and Champion.

As we played and the kids debated, it made me think of all the cool ways this could be used in the classroom. What a better way to engage kids in subjects than to involve them in current sporting events? The kids also surprised me with their public speaking skills, presentations,  general ability to prove their points, and their power to persuade.

Here’s a few ideas that you could use in your classroom:

The list could go on and on, and what kid doesn’t love a good debate on something they’re passionate about? 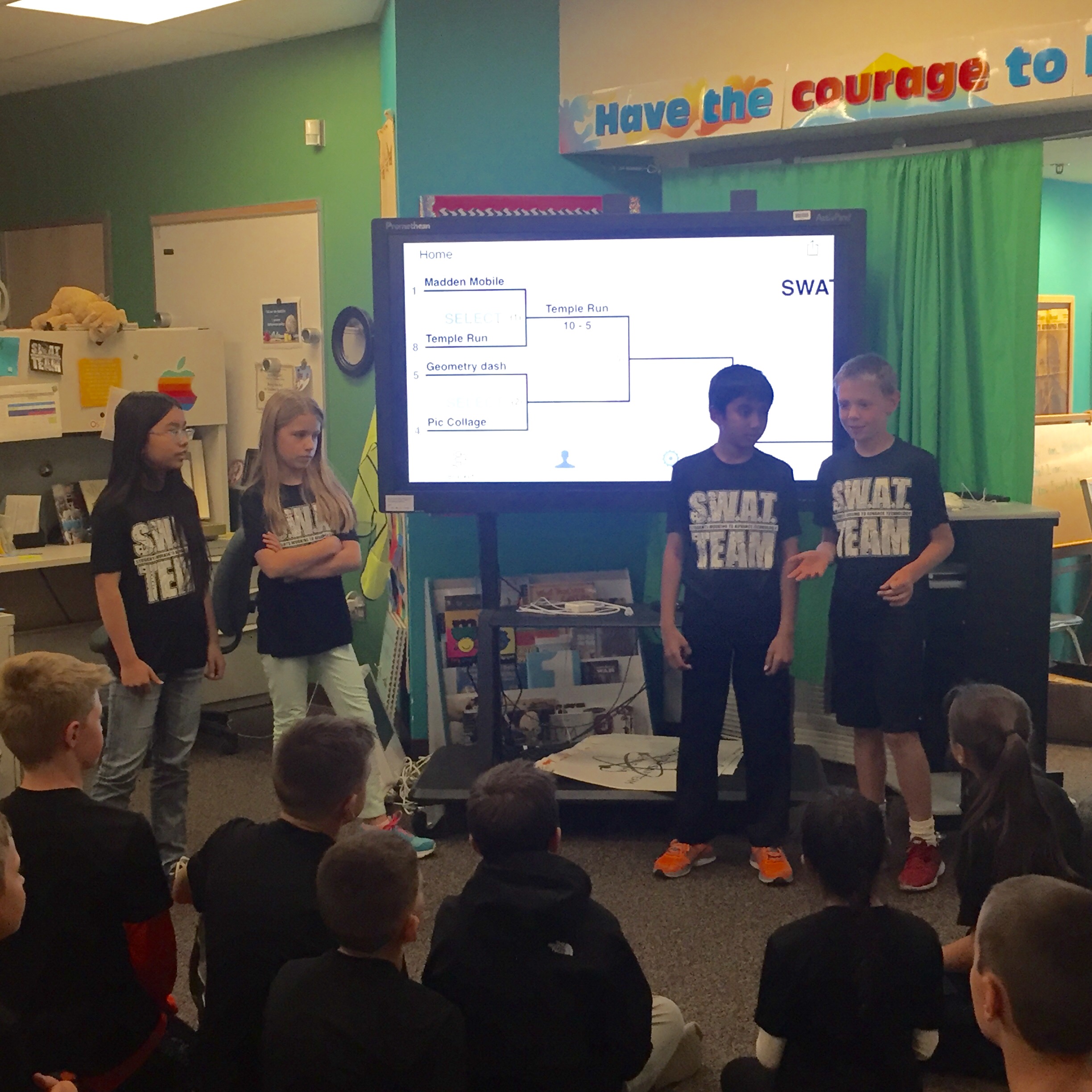 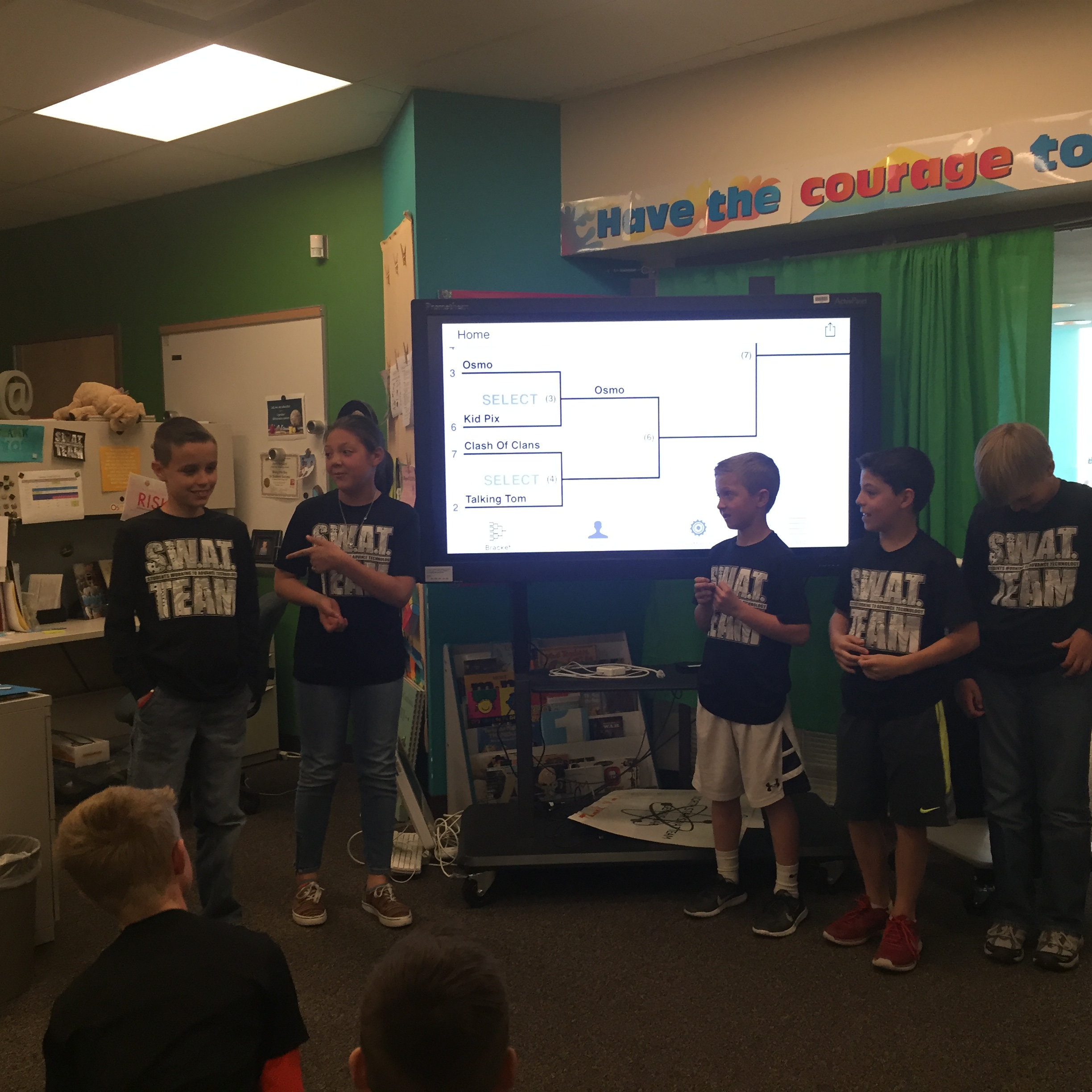 Talking Tom vs. Clash of Clans 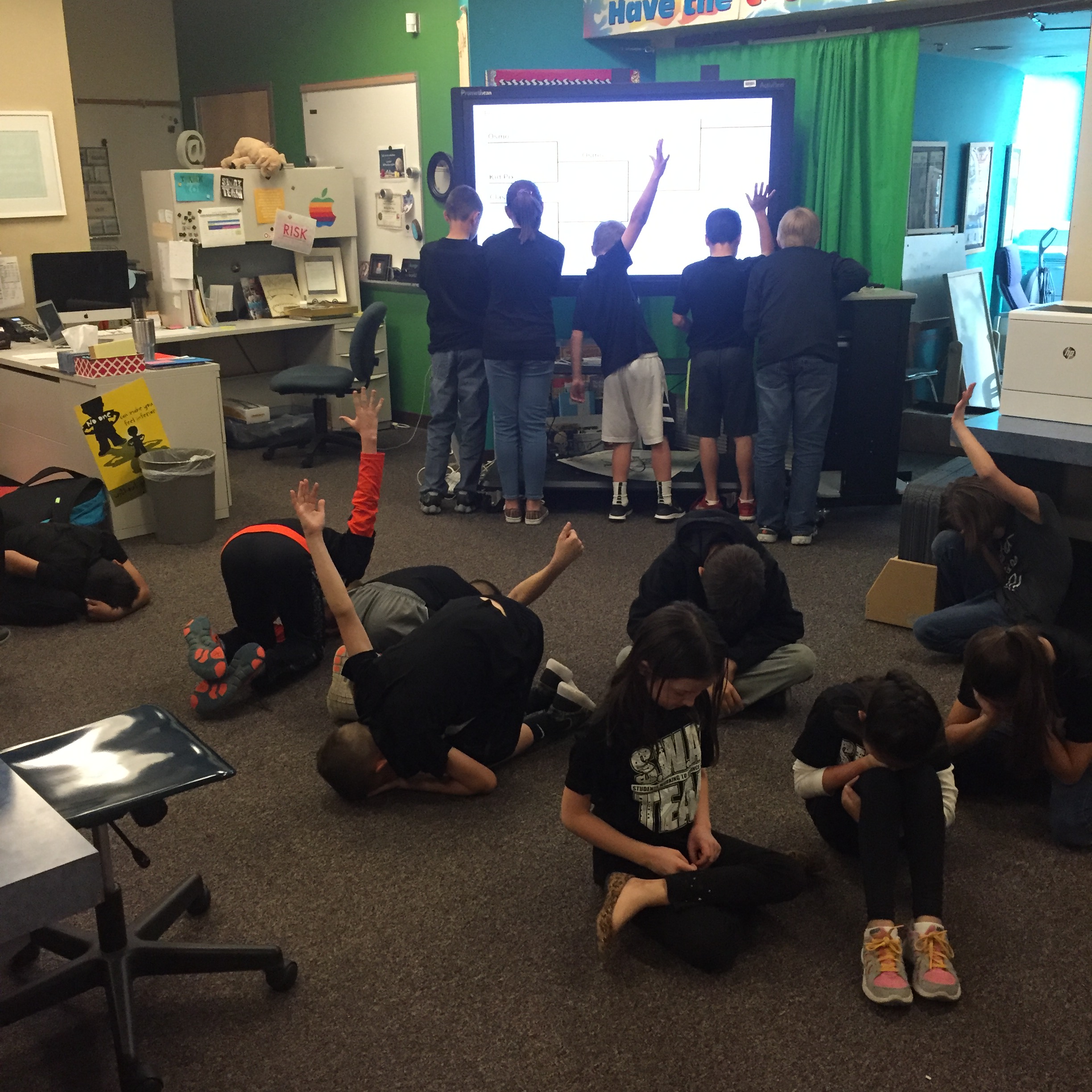 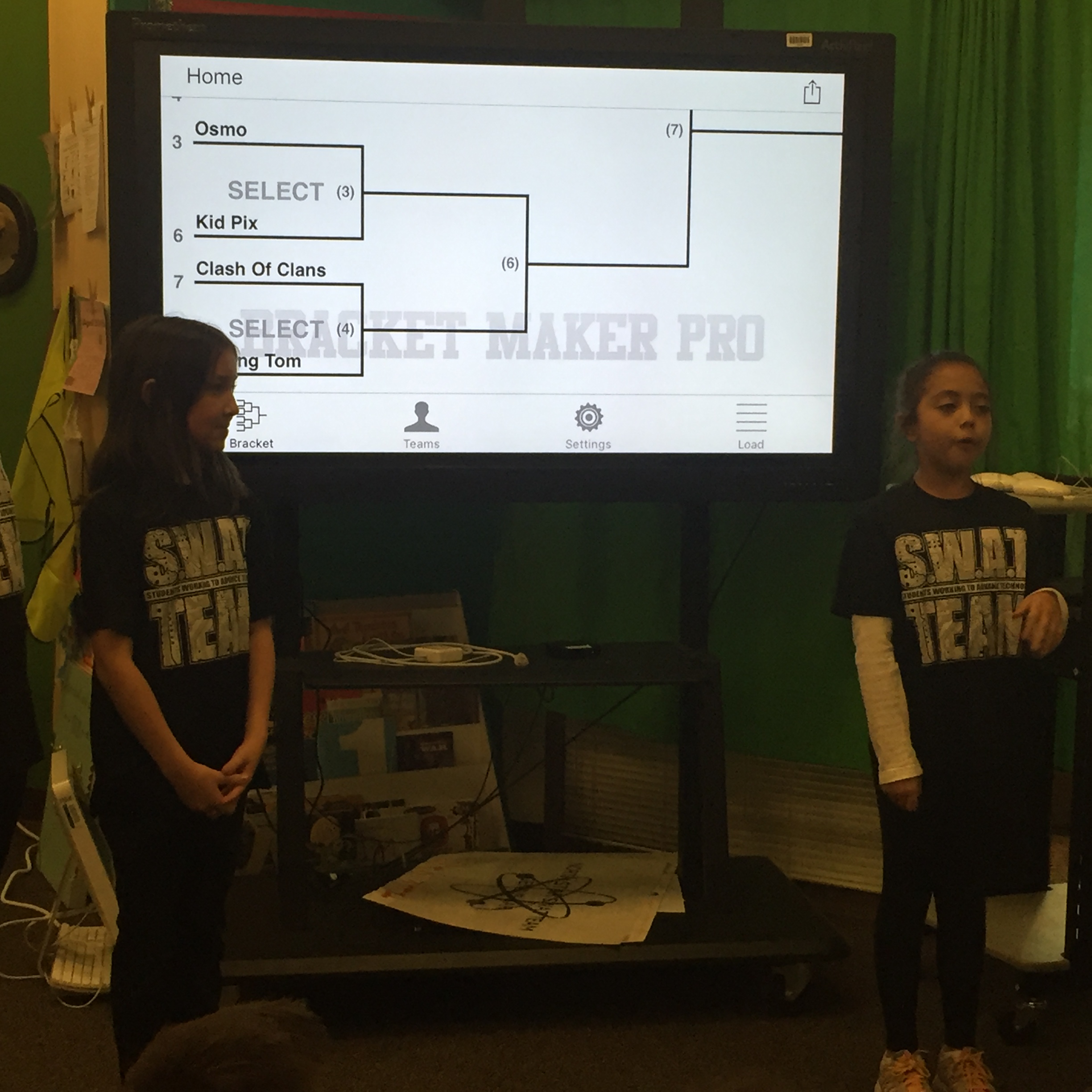 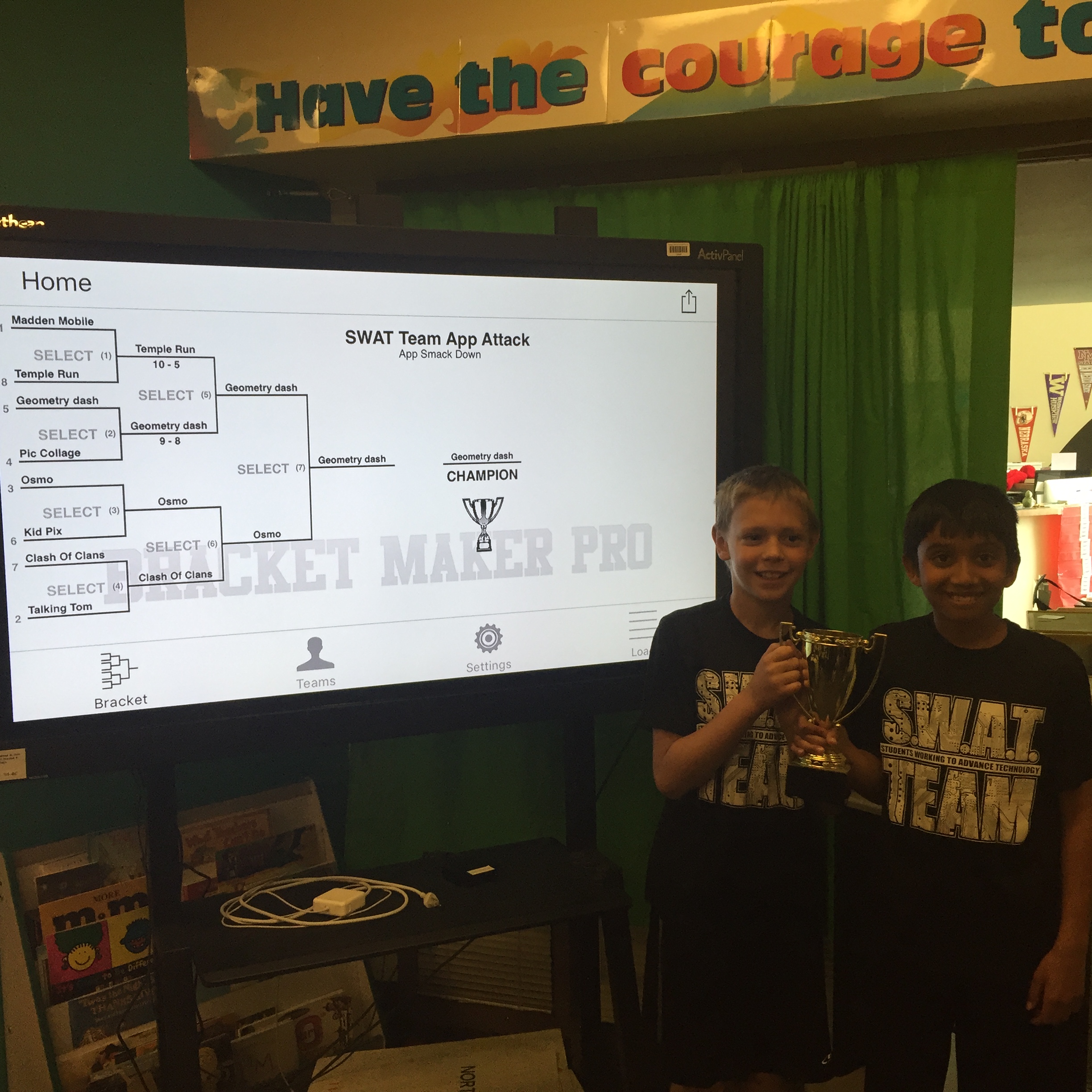 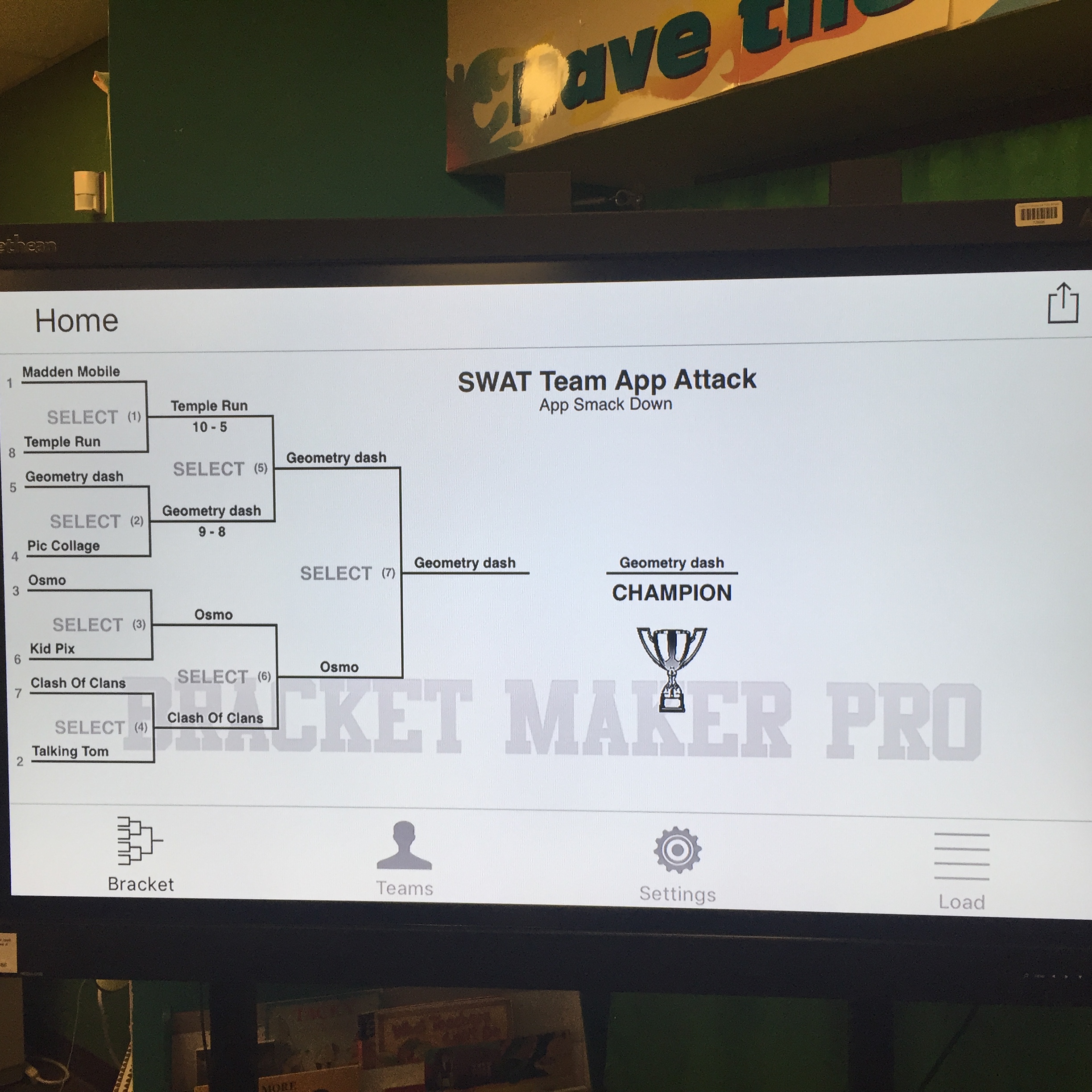 I hope you have fun with this! Please leave a comment as to how your class has used this app as a tool to support this fun learning activity!

Sometimes I wish I were a kid growing up in this digital world. I think I would understand math concepts better and I’d have so many resources at my fingertips. I also think using technology allows children to be creative in ways they couldn’t before. Here’s a fun literacy project that I did with second graders this week and they LOVED it. It really was so much fun. When kids have this much fun, they don’t even realize that they are learning! I love reading the book the Z Was Zapped by Chris Van Allsburg to my students. If you haven’t read it, it is a book where the letters of the alphabet take center stage and all of the letters have something happen to them that they probably would’t prefer. For example, A was in an avalanche. We discuss the pattern in the book and what the term alliteration means.

I usually have them do some type of digital project that coincides with the book, but this year, I decided to change it up a bit. I read the book aloud to the students and then I distributed a different letter of the alphabet for them to do their own “page” of the book on the iPad. For this project, we used two apps: Drawing Pad (paid)  (You could use any drawing app as long as it saves to the camera roll) and Chatterpix Kids (free). When the kids have their letter, they are instructed to draw something happening to their letter. It’s pretty fun to see what they come up with. They save their drawing to their camera roll and then open up Chatterpix Kids. Chatterpix Kids is an app where you can make a picture have a mouth with a voice. The kids import their drawing into Chatterpix Kids and draw a mouth and read a sentence just like the book. From there, they can save that to their camera roll and link to their blogs or the teacher can share their finished products. So fun. See some examples below:

The Z Was Zapped Literacy Project from April Requard on Vimeo.

One of my favorite stories is A Bad Case of Stripes by David Shannon. My second grade students read the story as a group on the Promethean Board using Storyline Online. As a fun activity integrating technology and literacy, I had the kids give themselves a Bad Case of Stripes! Below is a workflow for doing this project on the iPad. This project can easily be completed on a desktop computer with a program like Kid Pix or other drawing program where you can annotate or draw on an imported photo.

Video: A Bad Case of Stipes (This is from a few years ago, but just to give you another idea) 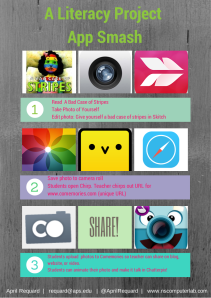 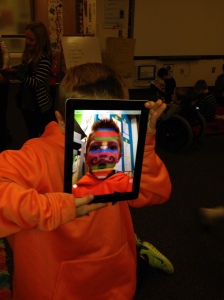 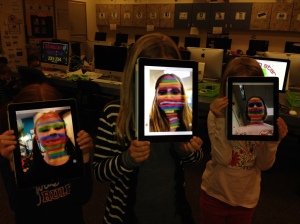